A cave in barangay Budlingin is considered to be one of the tourism sites which will invite tourists to come in the municipality of Alegria.

Municipal Tourism Officer Rene Paña bared that the Budlingin cave is very interesting tourist spot in the town, however it needs to be assessed first with the help of some government line agencies like Department of Environment and Natural Resources (DENR) and Department of Tourism (DOT). He revealed that the entire cave which was discovered long time ago has not yet officially and fully assessed. 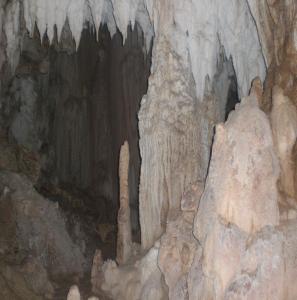 “Some LGU officials have conducted pre-assessment on some parts of the cave entrance only but no one has had courage to find more on what are really inside the deepest part of the cave. That is why we will convene the municipal tourism council soon to discuss this matter and ask the DOT and the DENR to help us conduct complete assessment of the said cave,” said Paña.

Paña believed that there are more interesting views in the cave that local and foreign tourists will like most. The entrance chamber of the cave has seen beautiful limestone, stalagmites and stalactites. He even thought that there might be people are residing in the innermost part of cave and it might have also some exit points into the town of Bacuag.

According to MPDC Edipolo Mosquito, Jr., the cave known as Puting Bato Cave can be reach more or less 3 kilometers walking distance from the proper center of Barangay Budlingin. ₪ Johny Natad

By: Edipolo A. Mosquito, Jr.

Aside from the famous Lumundo Waterfalls at Barangay Budlingin, another eco-destination site to be visited in the place is the majestic Puting Bato Cave where inside it are crystal quarts that glitters one can imagine how it is made by nature. This can be reached by means of horse riding or hiking with a distance of more or less 3 kilometers from the barangay towards the site. Before approaching the mouth of the cave, exotic and rare plants bearing with flowers captures one eye’s. These are added attractions in the surrounding environment of the cave.

According to reliable sources, the cave has an estimated one kilometer stretched but the whole area of the cave remains unexplored and needs to be validated by experts.

SOME PHOTOS OF THE CAVE