Make way for the newest and most environment-friendly merrymaking in Surigao del Norte, the aptly named KABIBO festival from the happy town of Alegria!

The Philippines has prided itself for being a country full of energy for merrymaking and jubilation. This fact can be most perceived in the blooming month of May, when fiestas in the Philippines as mostly celebrated. The number of barangays, towns and cities with identical May patron celebrants is innumerable that it is possible to fly from one place to another and celebrate the same saint’s feast day! In our very own Mindanao, we have Alegria, Surigao del Norte as one of the municipalities whose patron is San Isidro Labrador. Of course, every town has their own way of celebration. In fact, for a very long time, the Araw ng Alegria and pista have showcased a lot of entertainment and merriment for the townsfolk which in any case are typical set-ups in any municipality or town. But one day, something came up before the very eyes of the townspeople, and in effect, to the governing bodies of Alegria. It could only be summed up in two words- organic rice. 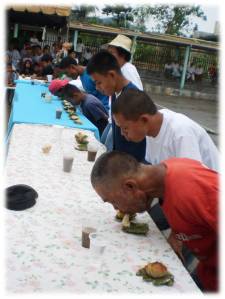 Bibingka eating contest as part of the KABIBO festival

Kape, Bibingka, Bodbod- they are highly appreciated delicacies that make up the acronym KABIBO. These are products that the people of Alegria do hope to be recognized primarily due to a decades-known fact that Alegriahanons do make excellent bingkas, bodbod and kape. Ultimately, these three products can be made out from the rice crop. But with the new organic rice, people can be more ensured that these delicacies are interred with health benefits as well.  And like all fiestas, fun games and activities laced with these products can surely bring out the “kabibo” on all the townsfolk. Notwithstanding that the festival’s name was also derived from the town’s name Alegria from the spanish  alegre- meaning joyful or “bibo”, nobody could really be disappointed in a gathering that aim to make people really happy. Coincidentally, the town formerly named Anahaw before being known as Alegria was named as such because a long time ago, a judge happened to visit the town and was visibly impressed and overwhelmed with the warmth and cheerfulness by which the people carried themselves in making him at home. Right at that time, he thought of naming the place Alegria for its people and even now, the people have not changed one bit like their forefathers.

Alegria is a town blessed with fertile landscapes capable of supporting life and crops in its stead. The people are typical rural folks who rely on growing crops and fishing for their livelihood. With the cost of commercial fertilizers going up and the need for the more supply of rice growing up as well, it is of no surprise that farmers nowadays are at a bend. How could they produce greater rice supply without shelling out too much on the high costing fertilizers? The answer is simple—go old school, go organic.  Organic farming is a low-cost but sure way of having a quality produce without stretching the wallet too much. It’s a primitive farming method that’s been around for years. Thinking about it, you can produce more crops with organic farming because there’s less spending with regards to the fertilizer but you still get back the same quantity and perhaps better quality crops. It is also healthy because organic farming relies on organic materials such as manure and the like, and not so much on chemical substances. This method is most beneficial to the poor farmers of Alegria. It could greatly help them make ends meet. And with Alegria’s main crop rice a staple among people, organic farming had opened up the avenue for the local government unit to promote the existence of organic rice which is cheaper for farmers and healthier for consumers compared to commercial rice.

With the quest for a unifying representation of the Alegriahanon spirit came the instinct to promote and uphold the unifying force. And so, headlined by the energetic Mayor Dominador G. Esma, Jr. and fully agreed upon by the Sangguniang Bayan Members headed by Vice Mayor Ernesto C. Odjinar, Sr., the organic rice was the focus of the One Town- One Product initiative. Thankfully, Engr. Pontius Ouano Gogo has generously rendered his services to be the only recognized producer of organic rice in the municipality, thus ensuring us of truly quality products.

The organic rice will not only captivate and alleviate the people’s condition; it will also bridge the gap between leader and follower, rich and poor. It will serve to protect the integrity of the people and the identity of the town itself. In the long run, Alegria would be known as the “bibo” town with the Kabibo Festival showcasing the kape, bibingka and bodbod made from organic rice by the happy people of Alegria. Everybody would be benefited by this environment-friendly and inexpensive initiative. Tourism, business, economy not to mention the effects of nature would truly be a most satisfying thought. Thus a One Town-One Product (OTOP) initiative was started, and hopefully, a united Alegria.

Now who wouldn’t be happy with that thought?