Every 15th day of June, the Municipality of Alegria, Surigao del Norte celebrates its foundation day. By virtue of Republic Act No. 5239 passed by Congress of the Philippines dated June 15, 1968 Alegria became a municipality where the celebration was based, thus, annual activities were done to give meaning to the said commemoration. Prepared and planned programs in connection to foundation day started in the year 1986 with different activities displayed but made in a simple manner.

Not until June 15, 2006 wherein more activities were added to promote the occasion and linked the newly developed Lumondo Waterfalls at Barangay Budlingin. This was done in order to be known to far distant places as the new ecotourism destination of LGU Alegria by having the 1st Mutya ng Alegria where the falls served as the main attraction of the show along with the competing beauties coming from the 12 barangays of this town. So far, it was successful as expected and the first crowned Mutya ng Alegria 2006 was Miss Ella M. Reambonanza of Barangay Anahaw. However, due to the May 14, 2007 local and national elections, the next mutya search was cancelled and celebration of Adlaw nan Alegria was deferred due to emergence of another incoming administration on July 1, 2007.

Under the new leadership, Hon. Mayor Dominador G. Esma, Jr. reactivated the composition of the Municipal Tourism Council. This time under his Chairmanship with Hon. SB Member Suzette Zamora-Dagcuta as the Vice Chairperson, the tourism council members are in the persons of Mr. Rene S. Pana, Mr. Raul C. Micompal, Mr. Ryan T. Abarico and Mr. Joselito Y. Madelo. Mr. Edipolo A. Mosquito, Jr. appointed as the Municipal Tourism Officer designate over his organic position in the local government unit of Alegria. After the said body was organized and strengthened, the first quarter of 2008 marked the plans on how to effectively conduct the 2nd Mutya nan Alegria presentation commemorating the 40th foundation day of the LGU. To insure the success of the search, SB Suzette Zamora-Dagcuta served as the chairperson of the mutya pageant where several plans and strategies were drawn and implemented relevance to the activity.

Furthermore, meetings and discussions were called to iron out issues and concerns in the upcoming Adlaw nan Alegria. This time it was unanimously adopted to have the following presentations and activities that started on May 13, 2008 and ended June 15, 2008, from the Patronal town fiesta to Adlaw nan Alegria celebration, as follows: 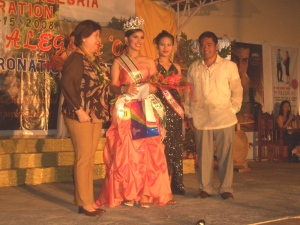 n barangays since Barangay Ferlda unabled to send their contestant. Generally, the entire choreography of the said activity was presentably well prepared and was in order, a much-improved presentation over the past. One of the indicators that proved the success was the tremendous presence of audience who witnessed the pageant, of course, with the strong support of the incumbent municipal officials. The luckiest contestant who withstands the hectic scrutiny of the board of judges was Miss Joana Jane Janson of Barangay Poblacion and was crowned as Mutya nan Alegria 2008 on June 14, 2008 by Hon. Mayor Dominador G. Esma, Jr. and representing the Provincial Governor was District II Provincial Board Member, Hon. Melba P. Garcia.

The 40th Foundation Year of Alegria was also highlighted with the First State of Municipal Address (SOMA) of Mayor Dominador G. Esma on June 15, 2008 during the Special Session of the Sangguniang Bayan of Alergia. Mayor Esma humbly enumerated the accomplishments he made during his almost one year of administration and fairly presented his next development plans for the municipality. Graced with the affair was Hon. Guillermo A. Romarte, Jr. who also sent his committed support to help the municipality of Alegria.

Highlighted also in the celebration were the blessings of the newly completed wet market building, public comfort rooms, streetlights, and acquired ambulance.

In related developments, prizes given and extended to lucky winners of the competition sponsored by the LGU and donors in the evening of June 15, 2008 to the following recipients:

In the next Alegria foundation celebration, we aspire to improve every activity and program to fulfill our aim in promoting our place, locally and abroad. By so doing, we will not stop exploring the best possible ways to gain more successes that will compliment to the progress in terms of economic endeavor, Mayor Esma said.